The central concerns of this study are court cases and the verdicts of the judges involved in them. Its uniqueness in Poland resides in the fact that the author does not restrict himself in his narrative to a presentation of judges' views, but concentrates on court rulings. It, thus, brings Polish readers close to the essence of American jurisprudence. (...) Jerzy Zajadło convincingly demonstrates the role of ideology, mostly that of natural law, in slave cases heard in court, introducing thereby the exceptionally important concept of "judicial disobedience." Further, the author shows how very often the issue of slavery was only marginal - fundamentally, it was a matter of the interpretation of the Constitution (...). From this perspective, I see the main merit of Professor Zajadło's work in the fact that it is basically a book about the law's conservatism and about conflicts between the law and morality. Laws of nature, customs, and interests all come into play, which, as a result, leads to a conflict between positive law and the moral requirement of disobedience. In Zajadło's book, the dilemmas of the judge's conscience are analyzed from all sides. 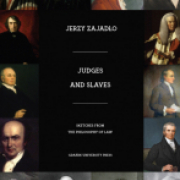